Written by Sam Mualim
Updated over a week ago

I can't see suggestions in the Product Group Refresher

There are a few reasons why this may happen:

The campaign is already up to date
The optimization evaluates all the ad groups but only shows those that have changes to be applied. Sometimes based on the structure of the shopping campaign, there may be no new product groups or ad groups that need to be created. This means your campaign is already in sync with your feed :-)

The reason why you're not able to see suggestions for new ad group creation can be because of the following reasons:

For example: If you're selling shoes and have split out product groups by brands like Nike, Adidas, Puma, and Reebok, then 10 new shoe models get added to Nike in the feed, they will be under the Nike product group and don't require their own product groups.

On the other hand, if a new brand like New Balance got added to the feed, the system will recommend creating a new product group.

In this last case you can do the following, to make sure you get recommendations:

I'm seeing an "Invalid hierarchy" error. What does it mean?

The Shopping Refresher Pro detects the structure in which ad groups and product groups were created, and it finds all the new products that are in the feed but which don't have product groups or ad groups in the campaign. It then creates new ad groups/product groups for them. But in order for the tool to create new items, your campaign needs to have a consistent structure.

For example, if the ad group hierarchy is Google Category 0 > Product Type 0 > Item Id and the ad groups are split at the second level, then the Everything Else (EE) nodes should be excluded for the 1st and 2nd level only, and should be included for the 3rd or Item Id level.

To fix this issue, you can use the restructuring option in the Shopping Campaign Builder. Within the same campaign, just use the same split and same ad group creation strategy, enter the prefix for the ad group and apply the changes. 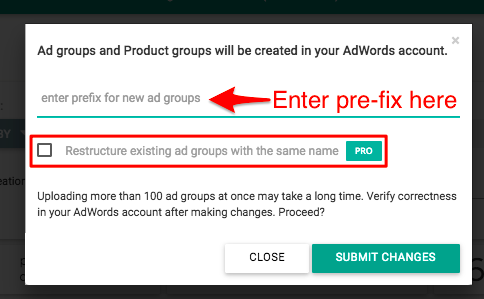